8000 families to benefit from relief supplies from county govt

8000 families to benefit from relief supplies from county govt

More than 8000 families affected by floods in Mandera are to benefit from relief supplies from the county government.
Deputy Governor Mohamed Ahmed Arai today flagged off trucks carrying the food rations including 102 tons of rice, 33 tons of beans and 25 tons of cooking oil to be issued to the families.
Speaking outside the county headquarters in Mandera town, Mr Arai who was flanked by Abdinur Mohamed Hussein said each of the 8,229 families are to get 12.5 kgs of rice, four kilograms of beans and three litres of cooking oil.
“The response interventions that are necessary to save the lives of our people and those of their livestock are immense. Accordingly, we call upon the national government, Non-Governmental Organisations and all other development partners to provide support to the families living along the riverine areas as it rains heavily in the Ethiopian highlands leading to more floods downstream in our county,” Mr Arai said.
The floods as a result of River Daua bursting its banks have uprooted hundreds of people from their farms and destroyed crops, disrupting livelihoods of farmers and sand harvesters living along the river. 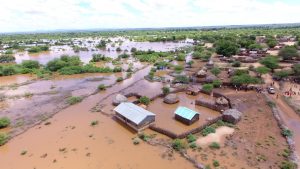 The effects of floods in Mandera County

Eight wards in the four sub-counties along River Daua have been adversely affected by the floods.
In Mandera North; Neboi Township, Khalalio and Libehia wards are the hardest hit while Mandera North, Rhamu and Rhamu Dimtu are the worst affected. In Lafey, Sala ward is most affected while in Banisa’s Malkamari ward the livelihoods of locals have been negatively affected.
According to the county’s Special Programmes team, 5437 people are to benefit from the food supply in Mandera East, Lafey (511), Mandera North (1694) and Banisa (587).
The deputy governor thanked the Mombasa County Government led by Governor Ali Hassan Joho for dolling out 19.7 tons of assorted foodstuff to Mandera residents in support of flood victims.
“He is indeed a friend of our county who moved to support us at our hour of need,” Mr Arai said. 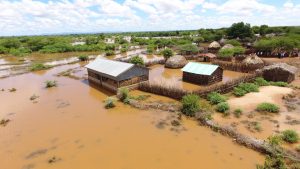 Houses and crops submerged by floods

Last week, Mandera Governor Ali Roba expressed concern over ravaging floods in Mandera despite lack of rains in the county as a result of heavy downpours on Ethiopian highlands, causing havoc downstream.
He said there was risk of transmission of Covid-19 in overcrowded makeshift shelters in displaced persons camps.
The county’s food security has also been threatened by recent drought, floods, locust invasion, ban of travel into and out of Mandera and the month of Ramadhan that has seen prices of food triple.
Mr Roba urged the Ministry of Devolution and Asals led by Cabinet Secretary Eugene Wamalwa to intervene and provide food and other support.
￩ ￫ x
By Rashid Ali| 2020-10-29T21:21:39+03:00 May 18th, 2020|news|0 Comments