Municipality hands over storm water and solar projects to contractors

Municipality hands over storm water and solar projects to contractors

The Mandera Municipality is to benefit from a Sh125 million Storm Drainage Works and a Sh50 million solar street lighting at Khalalio and Livestock Market funded by the World Bank through the Kenya Urban Support Programme.

The Municipal Manager Hassannoor Adan Abdullahi handed the sites for phase II of the drainage works in Busley and solar project to the contractors to start work expected to take 12 months.

Mr Abdullahi who was accompanied by the Municipal chairman Salah Maalim Alio and Mandera county Urban Development chief officer Zulekha Osman and Neboi MCA thanked the World Bank for supporting the projects and urged other development partners to also venture in the county.

The World Bank has also offered the Mandera Municipality a Sh50 million grant for purchase of furniture, stationery and development of a strategic plan.

“The community is happy with the projects which are climate resilient as they are involved in all steps,” Mr Abdullahi said. 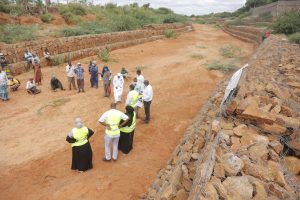 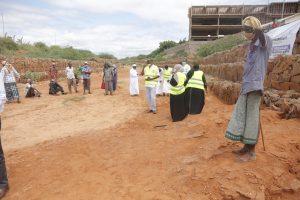 The UK government’s Department for International Development is also working with Mandera Municipality to build its capacity to plan and attract investments.

The Al-Imran Investment which was represented by Mr Ibrahim Adan and Diston Investment through Mr Ismael Maalim are to undertake the storm drainage and solar installation works, respectively.

The storm water drainage will measure 1.5 kilometres while some 202 solar poles are to be erected at Khalalio and Livestock Market and major routes in the two settlements. The first phase of storm water drainage that has helped curb flooding cost Sh95 million.
Mr Abdullahi was happy the World Bank had helped improve infrastructure in Mandera municipality, a thing that had helped attract investments.
“We thank the World Bank for the support and urge other development partners and investors to venture in Mandera Municipality which is a land of opportunities, ” Mr Abdullahi said.