Home/news/Boost for efforts to increase forest cover
Previous Next

The national government in partnership with Mandera County Government today planted trees as part of its efforts to sow one million seedlings by October and increase forest cover.
County Secretary Abdinur Maalim who represented Governor Ali Roba said the county that has 3.1 percent forest cover has so far planted 250,000 trees to mitigate climate change.
Mr Maalim together with county commissioner Onesmus Kyatha and Kenya Forestry Service Ecosystem conservator Mohamed Hussein Hassan led various government officials in planting 1300 seedlings at Mandera Municipality and other institutions to mark Public Service Week.
“As county government, this has been our routine for the last eight years. We have planted 250,000 trees in homesteads, along the streets and public institutions. All this is order to comply with the Head of State’s instructions to have 10 percent of our land mass under forest cover by 2022,” Mr Maalim said.
Mr Maalim was happy that parts of Mandera which were semi-desert in 2013 were now lush green; reducing dust, offering fodder for livestock and curbing soil erosion.
The Governor Roba administration, he said, has also recruited 1300 women to nurture the trees. The women are paid monthly fee.
The county secretary said the 648 youth under the Kazi Mitaani project have each been given five tree seedlings to plant in their homesteads.
Mr Kyatha said the first phase of Kazi Mitaani project where each youth is paid Sh600 is to end today.
The second phase of the project, he said, will start on July 6 and targets 3491 youth who will each be paid Sh455 daily. The daily payment, the commissioner said, had been reduced to cater for huge number of youth and is paid directly to the youth accounts as part of efforts to cushion them from effects of Covid-19.
The government, he said, targeted youth from vulnerable families which were not benefitting from other government cash transfer programmes for the Kazi Mitaani project.
Mr Kyatha thanked the Mandera county government for its efforts to mitigate climate change.
He said Co-operative principal secretary Ali Noor Ismail will preside over the planting of one million tree seedlings in the county during the onset of short rains in October following President Uhuru Kenyatta’s directive for the PSs to plant them in the counties. 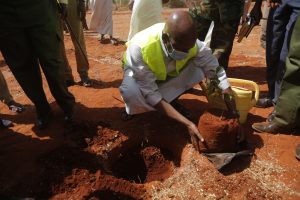 Mr Hassan said KFS was offering free tree seedlings to Mandera residents to plant to protect the environment but vouched for sustainability by locals watering the trees.
The governor Roba administration has won accolades from various quotas for planting trees in government institutions and schools. Contractors in the county are also required to plant trees before starting work on various sites.
According to Mr Roba, his government’s major environment and climate change protection programme has made the devolved unit overtake some counties endowed with huge rainfall annually in terms of forest cover.
Tens of boreholes have been dug in the arid and semi-arid county.
Some 100 water pans and dams of between 20,000 cubic metres and 200,000 cubic metres have been done in various areas.
The drought mitigation programme has enabled livestock to get water in close proximity.
￩ ￫ x
By Rashid Ali| 2020-10-29T18:37:48+03:00 June 26th, 2020|news|0 Comments